First-Due Arriving Companies; Are You Prepared?

As the First-Due Fire Company; Officer and crew, Are you prepared to address the fireground variables and occupancy risks upon your arrival and during the initial stages of your deployment and operations? Are you combat ready or passively engaged?

The First-Due Fire Office program can be downloaded HERE at Firefighter Netcast.com

The formulative discussion revolved around a variety of functional elements, traits, responsibilities and duties befalling the First-Due Officer, and was followed up with a post here on Thecompanyoffer.com. We discussed how today’s First-Due Officer must perform smarter with increased perceptions, discernments and acumens with intelligence and wisdom that is drawn from further progressing and collective fire ground response and operational experiences.

To further our dialog on the first-due, I’ve added a few series of video clips and images with related links to promote and stimulate your view of the first-due fireground scene as it relates to the variables and personnel perceptions; the need for diligence and cognitive situational awareness and risk assessment and being truly “prepared” both mentally and physically. By way of physically, I mean- is your gear and PPE, functional, operational and adequately in-place?

As you can see there are numerous instances where the difference in the incident outcome correlated to the level of PPE protection that was in-place and implemented at the time of adverse conditions or unexpected or unforeseen circumstances.

Here’s today’s situations to think about at the station, around the kitchen table, over a cup of coffee in the day room after your next alarm or tonight at the station for a “back step” company drill. 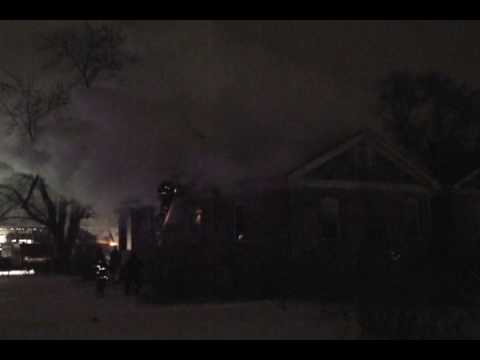 There have been a lot of articles and postings on adverse conditions as companies are opening up or pushing into the structure on the initial entry. Take a look at the next two series of video clips related to flashover conditions and the impact of that fire behavior on the companies and personnel. In each instance companies were extremely fortunate that the injuries sustained were not more severe than encountered.

Firefighter Will Gregory exits the home with his PPE on fire. Photo by Brian Haney, The Daily Record.

There are a series of photos  from a previous posting at STATter911 HERE that depicts firefighers working to push-in on a fire in a small residential occupancy. The ensuing flashover ignites the PPE of one firefighter. Look at the series of photographs and  take note of the fire and smoke conditions, the size and profile of the occupancy ( remember it’s Occupancy RISK not Occupancy Type).

The Dynamics of the Fireground in Seconds

Companies were dispatched for an assignment for a house fire. Both E807 and TK807 responded with crews of 4 personnel each. E813 arrived on the scene and reported light smoke showing on side Alpha. Upon arrival on the scene, the crew from TK807 (four staff) made entry to the house. The following series of events led to conditions in the house that presented a flashover environment. The hose line from E813 burst, a backup line was not charged due to no established water supply, and the house was not yet ventilated. Without the protection of a hose line, the crew was committed to the house when the room flashed. One firefighter was apparently far enough in the house to avoid any injury, A second FF received 2nd degree burns to his right shoulder, and a third FF received the full force of the flashover suffering second-third degree burns to his face, hands, and the majority of his torso. (Original incident information posted at the time of the event)

For a complete narrative and futher incident details of this previous STATter911 postings related to this event go HERE, and HERE

Take a good look at the performance of PPE when utilized and implemented correctly….

Don’t ever underestimate the dynamics and uncertainty of the evolving fireground during your operations. The video clip here depicts how quickly operations can change from an investigation to a major mass casualty incident.

For a comprehensive look at this event go here are two links for you to visit, HERE at Commandsafety.com and the NIOSH Report HERE

Be prepared for the unexpected and always use extreme caution and heightened situational awareness and fluid risk assessment and reconnaissance processing to stay atop of any undefined and evolving incident. Do not allow the potential lack of severity; of what may have all the indications of an unremarkable/uneventful and common call run such as a gas odor investigation or a natural gas leak cause your companies to have less than a high level of alert, focus and attentive accretions through all phases and deployments of the incident. Don’t become complacent.

In addition, take a look at some information relate to another tragic incident response to a reported gas leak that occurred in December, 1983 that lead to five fire fighter LODD’s in Buffalo, New York. HERE

Here’s a series of Reports worth your time to read related to the First-Due: